The smallest of the North-eastern states of India, Tripura, has cultivated cultural diversity and traditional magic significant for the population there. The reason for diverse culture is that this state is sandwiched between Bangladesh on three sides and Assam and Mizoram states in the eastern side. Along with the bountiful nature and mountainous beauty of Tripura, the heritage of this state flourishes more with its human resources and their cultures. The occasions, celebrations and festivals here convey a touch of originality coated with extensive layers of traditionalism. 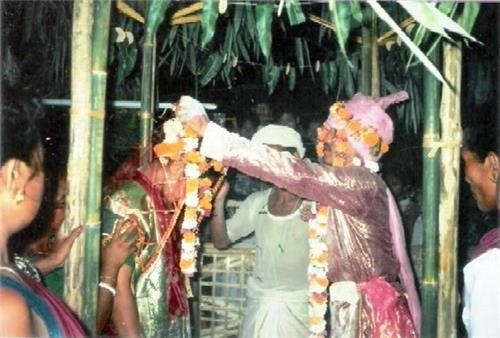 (Source: www.tripura.org.in)
Weddings like most of the other customs are a visual delight in Tripura with age old rights and customs along with an essence of the modern mind. There are various colors of weddings here with traditional tribal customs as well as Bengali styles and the hybrid ones. Some of the authentic Tripura marriage customs are described in brief below:

This is the actual traditional Tripuri marriage system. This includes old customs of negotiations between the families of the bride and the groom through a marriage broker along with the guardians. This is mostly observed among the Tripuris of the Sadar South. Raibai is what the marriage broker is called. Raibai along with the boy’s parents visits the girl’s home to choose her. They follow some superstitions regarding choosing the bride such as if during the visit they hear the bleat of deer or see any corpse or have a previous night dream of falling down of their hut due to cyclone, they do not set off for the visit on that day.

When the girl has been chosen for the marriage, the girl’s parents will demand dowry that will include money, ornaments and other articles. Among the Tripuris the bride will not get dowry for the in laws. If the bridegroom family agrees with the dowry then the marriage date is fixed by the Raibai. This is known as date for the ‘Koksungma’ (Mangalacharan).

On the Koksungma day, the would-be bridegroom family assembles in the would be bride’s home. The parents of both the sides sit side by side and two rice beer pots are kept before them. Two earthen oil lamps are also kept beside the rice beer pots. A bell metal plate containing some cotton, durba (long grass), copper coin, sesame seeds and soil is put in front of the parents to perform the rituals of ‘Dangdua’. Each person performs this ritual three times. After that both the parties take the rice beer. The father of the bride offers some money for meat to be arranged for the feast.

The would be bride then comes in front of the gathered people and bows before her parents, to her would be in-laws and all other senior members. The elderly people bless the bride with money, coins or jewelries and these articles are kept on that bell metal plate. After that the bride has to bathe her parents and her would be in-laws also. As per the custom, the bride has to wash the hands of all the elderly people after they have finished the feast. These rituals are known as ‘Koksungma’ which finalizes the marriage. After this day, the bride-groom's father will visit the bride’s home along with the Raibai to offer dowry. Both of the parties then sit together and decide a date for the marriage.

On the morning of the marriage day, the ‘Lampra Wathop’ deity is worshipped along with ‘Tuisangramma’. The groom’s family proceeds for the bride’s house with jharies or water pots, palanquin and musical instruments. This is known as ‘Khum Phunugo’. After the formals and rituals are over, the bride has to leave her parent’s home and step into the palanquin to proceed for her in-laws home. There is a taboo that the bride’s mother cannot attend her daughter’s marriage or accompany her daughter during her leaving ceremony. 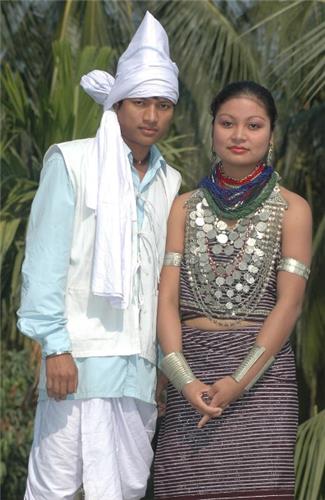 
They keep dried turmerics, dices, haritaki and wild beans on a plate for the bride and groom to play dicing. In the Tripuri marriages, the groom’s family offers wine bottles to the bride’s family. The newlywed couple is not allowed to sleep together on the first night. This is the concept taken from the Bengali marriages “Kalratri” custom. The bride on the next morning has to be taken for a bath. The wedding clothes are washed and kept away. New vessels will be arranged with metal articles for the bride to cook a first rice meal. The groom’s family will arrange a bedi or marriage stage and the exchange of garlands happens there. Then the groom will bring the bride inside his home. One artificial cradle will be made and one grind stone will be placed which symbolizes a new born baby. The bride will swing the cradle three times. All the attendees will then enjoy, sing and play games. There will be drinks along with authentic cuisine. This is the authentic Tripuri marriage custom followed. However nowadays it is losing its popularity.

Other Types of Wedding in Tripura

This is a rare marriage scenario within Tripuris. In this case, the parents of the boy and the girl exchange their children that is the boy is exchanged for the girl. This is done to avoid dowry. The rites and rituals are similar as ‘Hamjwk Tubui Kaimani’.

In this kind, the bride groom pays the bride’s parents with certain amount of money and buys the bride. Rites and rituals for  ‘Hamjwk Tubui Kaimani’ is being followed then.
Haimjak lai kailaimani (Marriage by Love)

This is a common and nowadays spreading marriage culture. The boy and the girl falls in love and convey their parents to accept their relation. If the parents are convinced, the marriage happens with traditional ‘Hamjwk Tubui Kaimani’ rituals.

This is also one of the prevalent Tripuri marriages. In this case the bridegroom leaves his house after marriage and settles down in his father-in-law’s house for good. He owns some paddy field from his father-in-law and stays with them. All normal matrimonial ceremonies happens for this also.

This type of marriage is similar to service marriages, yet the only difference between the two is duration to serve. In this case, the bridegroom has to serve for a short period in his future father-in-law’s house in comparison with the bridegroom of ‘Chamari Kaimani’ marriage.

In rare cases, the girl turns against her parents for not marrying the boy that her parents have chosen. She mostly will like or love another boy and convinces her parents to convince the parents of that boy for their marriage. If the results are positive, the marriage happens following traditional Tripuri customs.

This is widow marriage and adding goodness to our society, it is prevalent in Tripuri culture. Any widow, widower, divorcee or a deserted woman is allowed to remarry. The marriage proposal are again carried by the Raibai and if agreed the rituals are same as Hamjwk Tubui Kaimani. The worship of ‘Wathop’ deity and ‘Tuisangrama’ are performed. Ten fowls are being sacrificed for this ceremony. A widower can choose a maiden girl as his wife however a widow cannot choose a bachelor. A widow or divorced lady has to mary a widower or divorced man only to remarry.

This is a form of service marriage by the groom. In this system the groom gains the bride after his service in his future in-laws house for a defined tenure. The bridegroom is known as Chamari in Tripuri. The tenure can extent from 2 to 4 years also. The Raibai initiates this proposal, the future groom is provided with required cloths and utensils to have food. The future groom then contributes all works starting from water fetching to working on fields. At the end of the tenure, the marriage takes place and they call this puja as ‘Theka Subaio’.  One banana leaf is put before the groom and on the leaf all worship articles are put. After the marriage a big feast is arranged where dried fish curry is an inevitable dish.

Wedding Costumes and Jewelries of Tripura 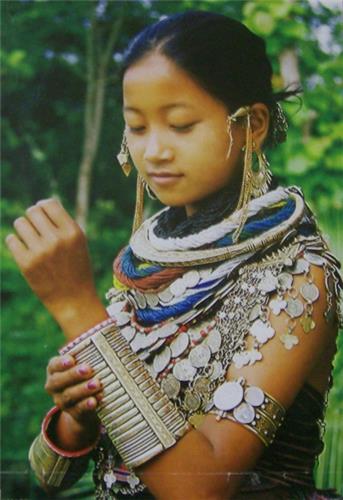 The wedding costumes of Tripura are ethnically woven and embroidered suiting the special occasion. Rinai is the bride’s traditional wedding dress called. It is a long gown type dress draped along the waist. There is also Risa which is shorter than Rinai worn by the bride. The colorful piece of fabric Risa covers the complete chest portion in a very ethnic way. Beautifully woven designs, floral patterns and brocaded embroideries depict the elegance and grandness of Risa. The groom wears a Dhoti (a cloth draped round the waist) at the bottom and shirt on top. Along with that they wear a waist coat or sleeveless coat made from the same fabric like Risa over the shirt.

Food and Drinks at Tripuri Weddings


The wedding feast in Tripura comprises of various regional delicacies. Fish and meat are the inevitable part of the wedding foods. They have curries prepared with dried fish that is commonly served. Red meat is also very common which includes pork along with mutton. In many rich weddings, they also serve rabbit meat curry and tortoise meat dishes which are costly. Chicken dishes are not very common in Tripuri marriages however with nowadays trend even that is included. There is a special pork preparation that is done by cooking the meat inside a bamboo stem. This dish is a healthy and tasty steam preparation of pork rather than using more oil.

Rice is the main staple food in this state so along with the other dishes prepared plain hot rice is always included in the menu. Mostly the rice used for marriage feast is from Jhoom cultivation of the farmers that year. 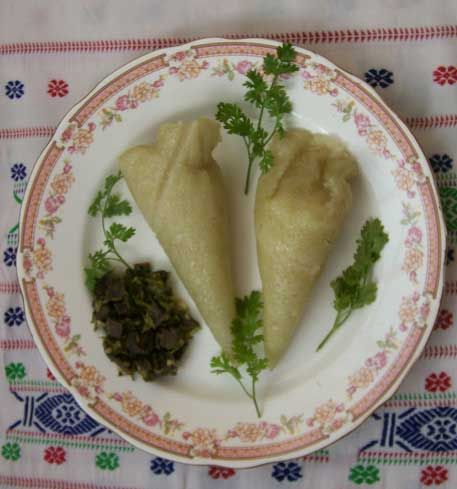 For drinks, rice beer is very famous and plays an important custom regarding the marriage also. This rice beer is known as ‘Chuak’. There is another beer prepared from millet rice fermentation, ‘Apong’ which is also served during the feast. Among the other delicacies of Tripuri marriage feasts includes :


The food during marriages is served on banana leaves in a traditional custom and the drinks are served in mud made tumblers.